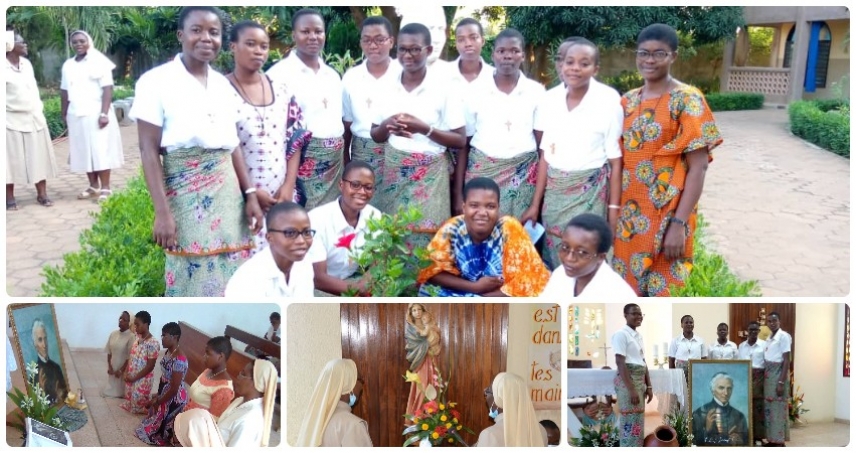 On 15 August 2021, the solemnity of the Assumption of the Virgin Mary is marked by entrance to novitiate of five postulants, Bernice, Clémentine, Charlotte, Félicia and Thérèse.
During the short ceremony, a sign that distinguishes this stage of the formative journey was given to them: the crucifix. It is an invitation to conform to the Word of Jesus who asks to always follow Him, even when it can cost sacrifice, and it can only be done with love, as He did. The words of the Father also resounded in the hearts of the five new novices. St. Luigi who urges them to make their love grow for the Lord, by fixing their gaze on the Crucifix.

On 22 August 2021, three young aspirants, Aubine, Nina and Olga, began the first stage of their formation, the postulancy.
This is the stage in which one learns to become a disciple. A disciple is the one who listens to the Master, lets himself be instructed and guided by him; he learns to know his Master better and to love him. For the journey of Aubine, Nina and Olga, the most suitable tool that helps them to become good disciples of Christ is the Word of God that was given to them, together with a medal of Mary, the disciple par excellence, to guide them to his Son Jesus.


On 11 September 2021 was the day of the first profession of Sister Marie Christine and of Sister Marie Sosthène Sévérine.
The ceremony began the previous evening with a vigil that emphasizes the importance of the event: offering of life to the Lord by professing the three vows of chastity, poverty, obedience, before the Church.

On the day of the first profession our tradition of choosing a 'religious surname' that is both an expression of the spiritual experience lived and an orientation for life in the following of Christ, is significant. Sister Marie Christine chose to call herself 'of the love of the Good Shepherd' and Sister Marie Sosthène Sévérine 'of the Divine Will'.
The two newly professed sisters were given the Rule of Life, the text on which they will be called to model their life of fraternity and mission, and the religious habit, a sign of belonging to the religious family.


To the five postulants, Bernice, Clémentine, Charlotte, Félicia and Thérèse, to the three novices, Aubine, Nina and Olga, and to the two newly professed, Sister Marie Christine and Sister Marie Sosthène Sévérine, we wish that they may grow with joy in love of the Lord and in fidelity to His call.

More in this category: « Get out of your land and go where I will show you 5 October: solemnity of St. Luigi Scrosoppi »