The was a problem converting the source image.

There was a problem rendering your image gallery. Please make sure that the folder you are using in the Simple Image Gallery Pro plugin tags exists and contains valid image files. The plugin could not locate the folder: media/k2/galleries/1020 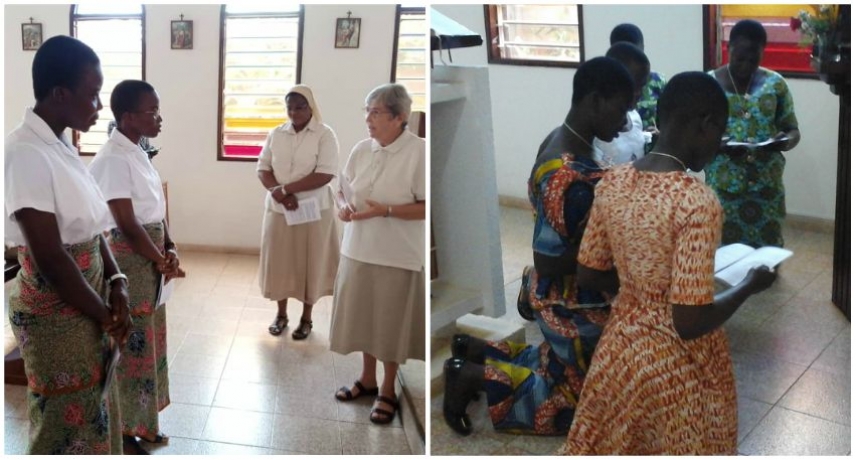 On 15th August, the date of the Assumption of the Virgin Mary, our Province of Africa welcomed five new postulants into the novitiate: Bernice, Charlotte, Clementine, Felicia and Teresa.
The ceremony began in the afternoon. It was highlighted with the liturgy of the Word, the awarding of the medal, thanksgiving and consecration to the Virgin Mary. In fact, the Provincial, Sister Anastasie , invited the young postulants to let themselves be led by the Virgin Mary towards her Son Jesus and also towards Saint Luigi, their Father, elder brother and friend, in other words to open themselves totally to him. Inebriated with joy, on the dance steps, the young postulants gave thanks to God by singing the Magnificat.

Before concluding the ceremony, Bernice , Charlotte, Clementine, Felicia and Teresa were welcomed by the young women in formation, the novices, who offered them passion fruit as a symbol; with this gesture, the novices invited these postulants to extend their charity towards all without exception, especially in fraternal life, in the way in which the passion fruit tree embraces everything it finds on its way.

On 7th September 2020, Martine Coulibaly and Nicole Ménam entered the novitiate. The celebration began at 11 am with the sign of the cross made by the Provincial, Sr. Anastasie MOKLI, followed by an opening prayer. The celebration continued normally with the rites of entrance to the novitiate, first of all with Psalm 62 and the Gospel according to St. John 3, 1-8 chosen by the pre-novices. The provincial asked future novices to freely express their wishes. They personally expressed the request to be admitted to the novitiate. The Provincial received and welcomed them, entrusting them to our Father Luigi and to the formator Sr. Germaine, exhorting them to allow themselves to be formed by her with the help of the Holy Spirit and through the intercession of the Virgin Mary and Fr Luigi.

The novices, Martine and Nicole, presented the symbol of light that they chose as a model to follow and to imitate with its qualities during their journey of this new stage of the novitiate. They want to contaminate those around them with their human warmth, their joy and by the grace of God, they will try to give a good witness through their life.

After the thanksgiving of the new novices, as usual, those of the 2nd year welcomed them with a symbol of vine and the branch, recommending them to try to remain in the Lord as the branches are united to the vine because without Jesus we can do nothing. This beautiful ceremony ended by singing Angelus and praising God as a sign of gratitude and thanksgiving for all His benefits in our Religious Family.

More in this category: « Fascinated by the beauty of Christ A new Province is born... »