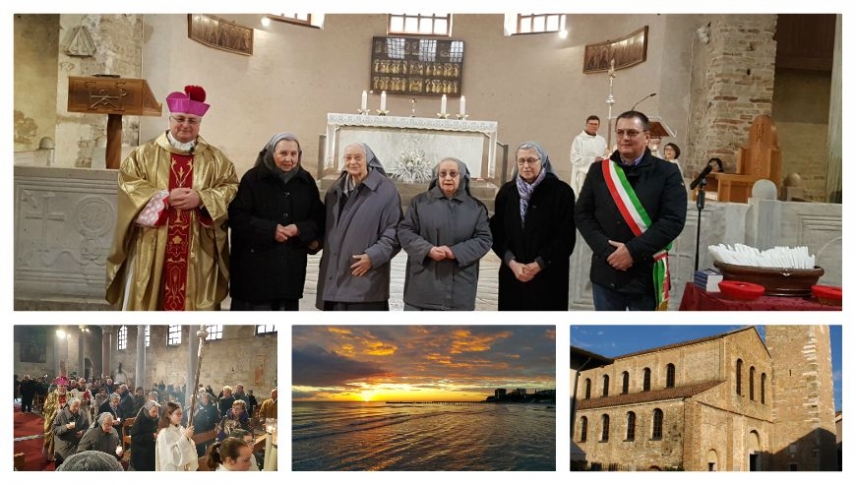 On Sunday, 2 February, the ecclesial community of Grado came together to wish the three Sisters who leave the city definitively and to thank all the sisters who, more than 100 years of presence on the island, have contributed to the good of the population.
The Dean, Msgr. Michele Centomo, in his homily invited those present, to meditate on the feast of the day, the feast of consecrated life. Then addressing the greetings to the sisters, he said:
“Thank you so much for your service in the social life of our island. The community has enjoyed this grace which for a hundred and twenty years has strengthened the human relations: the sick felt loved and less lonely in their old age home; children of kindergarten and catechism felt that they were guided and followed well; the inhabitants and tourists felt supported even without their knowledge. You have lived what is written in the Gospel of Luke «Whoever welcomes this child in my name welcomes me; and whoever welcomes me, welcomes the one who sent me "and in the words of your Holy Founder, St. Luigi Scrosoppi, " Charity, charity, save souls with charity”.
Touched by the words of greeting from the mayor, Mr. Dario Raugna, as he expressed this way:
“Every ship that passes, leaves a trace behind it and in the same way, what is left by the Sisters of Providence in our Island is a teaching of life that expresses a sense of responsibility, altruism and gratuitousness. … A path of spirituality that has gone deep in welcoming other sisters in need of care and rest, but also in teaching, in assisting the sick and in comforting the elderly of Casa Serena. ... Thank you above all for teaching us what modesty, restraint and discretion mean. … For the Testimony which is substance, consistency, concreteness, body, passion, essence; which remains there, indelible, step by step, brick by brick, and which contributes to the construction of the common house.
We make sure that their life teaching is not lost, and according to the law of nature, people pass away, but the works and the values ​​remain, they make up our identity, they must be collected and handed down. I believe that this commitment, on our part, more than any other, will be able to soothe the pain of distance from Grado and its inhabitants ".
Unanimous feelings in the hearts of the sisters: The good received finds a place in the loving hands of God; to Him be the glory and honour for the good done in His name by His grace and which will bear fruit according to His loving providence.

More in this category: « A new Province is born... Yes forever »