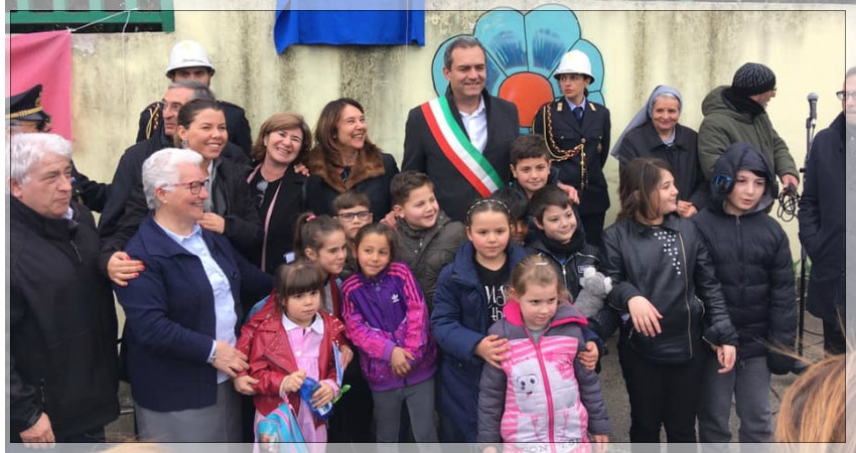 On 19 March 2019, the road that runs alongside "The Garden of a Thousand Colours", the Scampia Play Centre, was named after Sister Maria of the Sisters of Providence.

She was born in 1819 and passed away in 1855, which indicates her short life spent for the benefit of the 'derelicts', to the point of sacrificing herself to assist the little cholera patient like a mother and then to die herself after only three hours.
An emblematic name, that of Sr. Maria, which recalls the generous and unconditional dedication of many other sisters who lived and live in the territory of Naples: alongside the sick in the Sanatorium 'Monaldi' from 1938 to 1991, and in the Sanatrix Clinic in the neighbourhood of Vomero from 1963 to 1970;in the Casa Famiglia of the Rione Luzzatti from 1987 to 1995, and now here in Scampia for about 30 years, at the service of the most needy children and their families, offering care, support, listening, education ... with a charity to the fullest.

The title of the street was part of the 'March Donna2019' programof the municipality of Naples with the titles dedicated to female characters to give space to the city toponymy to artists, scientists, women who with their civil, political and social commitment have marked history.

The event took place in the presence of the Mayor, Luigi de Magistris, of other Municipality authorities who contributed to the realization of this initiative and of a public, made up of children and adults.

The final invitation for everyone was to make a "talking" plaque dedicated to Sr. Maria a plaque that tells everyone: "Don't be selfish, put the good of others at the centre of your daily actions!"

More in this category: « You have conquered me, Lord! Following Jesus »