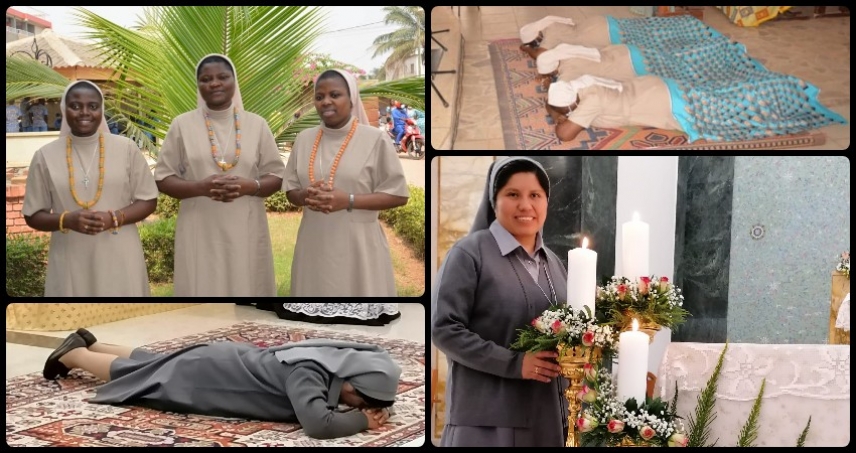 Rome, 2 January 2022 - 22 January Lomé (Togo)
These two dates mark the day of the perpetual profession of Sister LEONARDA (in Rome) and of Sister PAULINE, Sister FRANCOISE and Sister FLORENCE (in Togo).
Their 'yes' to the Lord, which began in the early years of formation, is now pronounced before the Church and welcomed by the religious Family in which they are fully hinged: thus it has received the seal FOREVER, as a faithful response to the fidelity of God.
For Sister Leonarda, the distance from her homeland, Bolivia, was made up for by the affection of so many sisters, as well as by the great honor of having His Eminence, Cardinal João Braz de Aviz, as the main celebrant.
As is customary, Sister Florence, Sister Françoise and Sister Pauline, during the ceremony, each manifested to the assembly their commitment to follow the Lord through symbols: the ash to express the fragility of the creature placed in the hands of God, the lamp as an expression of the love that must enlighten the brothers and sisters even from afar, the clay pot which, in the hands of the great Potter, lets itself be modeled according to His project.
We invoke abundant blessings from the Lord on each of these four newly professed sisters.
We wish them that the feast they lived, with so many other sisters and with the joyful participation of the people, be a pledge of a long journey of charity, holiness, fraternity.
May the enthusiasm of self giving to the Bridegroom Jesus remain in their hearts and may they be bearers of goodness and serenity wherever the Lord calls them to serve Him in their brothers and sisters.

More in this category: « 5 October: solemnity of St. Luigi Scrosoppi At the beginning of our house »