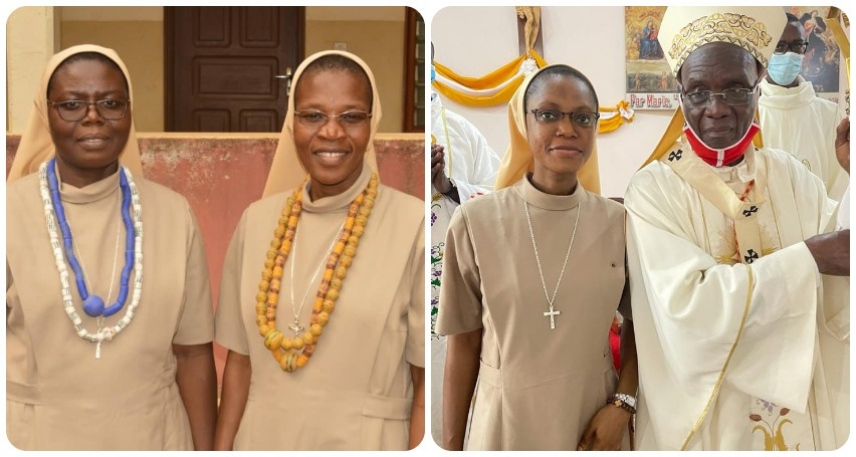 The province 'S. Gaetano 'of Africa recently experienced the joy of the final profession of three sisters :
- Sister Bernadette and Sister Elise said their definitive yes on 23 January 2021 in Kouvè (Togo);
- Sister Hortense made her perpetual vows on 6 February 2021, in Abidjan (Ivory Coast), in the village of Anonkoua-Kouté where she was born and brought up.

Both celebrations were preceded by a vigil prayer, together with the sisters of the neighboring communities, who lived with them, to pronounce their yes to the Lord.
The essential aspects of consecration in a religious Family have been expressed through three symbols:
- the Word of God and the Rule of life – following of Jesus and holiness in everyday life;
- the booklets 'You will recognize them by their fruits' - belonging to the Congregation and its mission of charity.
The two Eucharistic celebrations were respectively presided over by Mons. Isaac Jogues Gaglo, bishop of the diocese of Aného and by Cardinal Jean Pierre Kutwa of the diocese of Abidjan and made it beautiful and solemn by the participation of many people and also with their joyful songs.
The celebrants encouraged the sisters to continue their journey with fidelity, to live the gift of themselves in humility and full availability of their service, to be ambassadors of peace and witnesses of the Gospel.
The symbols, that each sister chose to express her definitive commitment to live, were significant.
- Sister Bernadette: the pumpkin that represents availability and service;
- Sister Elise: the baobab which expresses strength and perseverance even in difficulties and weaknesses;
- Sister Hortense: the palm plant that represents the total gift at the service of God and of the brothers and sisters.
The feast ended with the joy of all the people to thank the Lord for the gift of these sisters and to ask for the grace of fidelity for them; the final profession, in fact, is not a goal, but a stage in life that requires so many other generous yes.